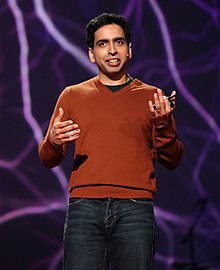 The coaches, sponsors, and administrators of AGLOA have long known the life lessons that competitive gaming teaches.  And there are thousands of examples of gamers who have used those lessons in their chosen life paths.

Salman “Sal” Khan from Grace King High School in Metairie, Louisiana, in many ways, serves as an example of using his Academic Games roots to better serve the common good.

Sal competed locally and nationally before matriculating at MIT where he achieved three degrees.  He received his MBA from Harvard and for six years was a hedge fund analyst. Yet, it was a request from his cousin for math help that prompted him to create a series of YouTube videos for her benefit.  In 2009, Sal left the world of finance for full-time pursuit of his passion—to provide “tens of thousands of videos in pretty much every subject” and to create “the world’s first free, world-class virtual school where anyone can learn anything”.  As Sal has stated, “It was the highest social return that one could ever get.”

The organization produces micro lectures in the form of online videos.  In addition, the organization’s website features practice exercises and tools for educators.  The 6,500 videos have been translated into 65 languages and the Khan Academy has been translated into 23 languages and now includes lessons on history, medicine, physics, chemistry, biology, civics, economics, and computer science.

Sal has been interviewed on the Colbert Report, PBS NewsHour, CNN, NPR, The Charlie Rose Show and is presently seen in a series of Bank of America commercials.  Over 3.5 million viewers have downloaded his TED Conference presentation in 2011.  Sal was recognized in 2012 by TIME Magazine as one of the 100 Most Influential People and was awarded the Heinz Award in 2014.

Watch this video on AGLOA’s

Over 1,000 current players and nearly 100 Academic Games alumni will take part in the 50th Anniversary Celebration, surrounding the 2015 National Tournament.

You can help us with the super Celebration by making a tax-deductible donation of any size.  You can write a check to AGLOA and mail it to AGLOA / P.O. Box 17563 / West Palm Beach, FL 33416.  Or you can give online at: http://AGLOA.org/donate.